Okay, I was not even going to address the length of time I've been silent and haven't written a post. For far too long my urge to sew has been lost behind what needed to be done both during the pandemic and as I slowly reopened the studio to sew for others. Writing about any of it was simply not what my life needed. I'm back, and I've made up a pattern, I need to share my thoughts about it with you.

I took some time out from my busy bridal alterations schedule to make myself a new summer dress. I had purchased this beautiful French viscose knit print during Elliott Berman's sale this past March, along with several other knits, without having a particular dress pattern in mind. StyleArc had a sale on dress patterns around the same time, and this one found its way into my cart. They seemed a pretty good match, though I worried a bit that the fabric would be a bit soft and drapey for the style. It worked out better than I'd hoped! 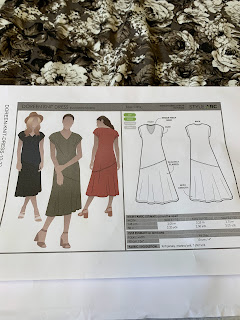 Having some experience with StyleArc tops and jackets I know that for me, they run big through the neck and shoulders - but I wasn't sure about the lower body. My weight is up again, and I need more room through the waist and abdomen, so after downloading their size chart and checking my measurements against them, this is what I came up with: 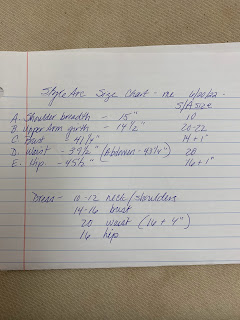 I used the 10 for the shoulders and neck. Too often when I've made a new pattern, I am uncomfortable with the loose fit and low neck of the size I chose - I may be on the heavy side, but my shoulders and the breadth of my back are pretty small. This was definitely the right choice for me.

Because I want to have a bit more coverage on my upper arms, and I usually need a full bust adjustment, I extended the end of the shoulder to the size 14 point and blended out to the 16 at the underarm. When finished, I feel I could have used the 14 at the underarm and been fine.

I blended out to the 20 at the waist, and back to the 16 through the hip to the hem. I cut the side seams of the bodice front and back with 1" seam allowances, in case I needed a bit more for that full bust - there are no darts in this design.

Tracing the pattern pieces and cutting were a slower process than I'm used to, as both front and back bodice are full pieces that need to be cut as a single layer due to the asymmetrical seam at the hip. Once cut, I knew the assembly would go pretty quickly.

I wanted to check the fit before getting all the parts serged together. So I basted the shoulders and sides of the bodice front and back to try it on. I didn't get a photo of me wearing it that point, but wish I had. Surprisingly, it felt pretty good as a top - my husband liked it so much on me, he urged me to make one out of this pattern. I may do that, but would soften the angle of the asymmetry to make the high side longer and low side shorter. I couldn't tell how loose it would be through the waist and hip, without the weight of the skirt attached, so I sewed the sides seams on the adjusted seamlines I'd chosen for my measurements - leaving the extra seam allowance I'd added in case of later adjustment. 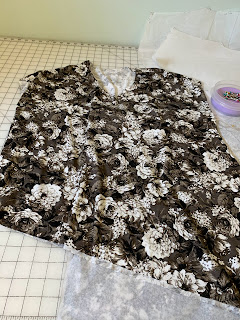 There are some errors in the limited instructions for the pattern, and I will be writing to the company to make them aware of my concerns. Some of it is due to a difference in terminology, I assume, that is used in Australia versus what we use here in the US. 'Flat stitch' is mentioned where I'd expect 'understitch', for instance. That's easy enough to learn to identify. Most importantly, the drawing and text for the sleeve bands tell you to sew them together with 2 seams, one at each end. The band is cut as a pair, one pair for each side, with one seam at the underarm to form a single band for front and back - the second band is a facing. If a novice sewer followed the instructions, they would make a band twice as long as required, and use up both pair of bands as they worked through the instructions. To further muddy the waters, the pattern is layered with all sizes, and the double notch for the back portion of the sleeve band is marked at a distance that makes the second notch of most sizes line up with the first notch of another size - I missed the double notch completely when cutting, and thought they'd left it off. Also, the notch for the shoulder point isn't labeled as such, and the instructions don't refer to it because they show a seam at that point that doesn't exist. 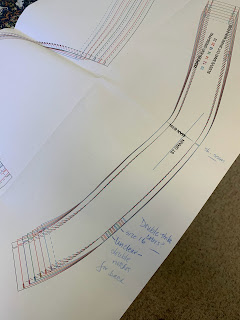 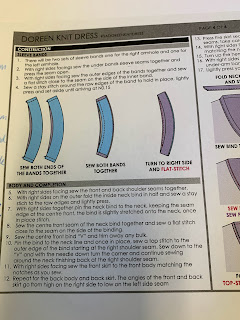 Although the cutting instructions say to cut 2 pair of the bands in 'fuse' as well as fabric, I made my sleeve bands with one layer of fusible interfacing, using Pro-Tricot Deluxe from Fashion Sewing Supply. I felt this was enough for the soft viscose knit. I'm happy with the result.

The real confusion for me was in the instructions for the neck binding - 'bind' is how the Australian company refers to this piece. I read the instructions several times without realizing the resulting band would be turned to the inside and topstitched, rather than standing up in the neck opening. It was only in reading the instructions aloud that I caught the disjointedness of it having been translated from some other language. In the end, I decided that with the exception of telling you to staystitch the raw edges of the folded binding, then stretch to fit the neckline (isn't the purpose of staystitching to prevent stretching?) along with repeating two of the steps in different words, the instructions were accurate but difficult to understand. I put the band on using my own method, but I feel badly for a less experience sewist trying to follow the steps here.

Once the skirt was attached (and all seams serged, naturally!), I decided the fit was really a lot looser than I wanted. I removed a full 4" at the waist level, taking an addition 1" out of each seam there - essentially reducing the waist and upper hip to a size 12 - but tapering back to the size 16 at the underarm, and starting a taper back out to the size 16 from the level of the low side of the skirt seam to the hem to preserve the fullness there. I would take that underarm to a 14 or smaller, if I make this again - but with the bands attached I really didn't want to mess with it on this one.

This will be a really wonderful addition to my summer wardrobe - light and cool, it feels like I'm wearing a nightdress!